This is a question I’ve pondered for a little while, and there doesn’t seem to be much written about the subject. Is it acceptable to go for afternoon tea on your own? 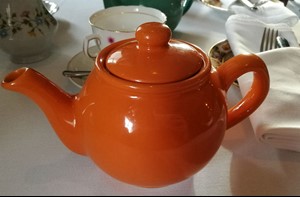 I first thought this when I went to London to visit a friend. Between my train coming in and meeting my friend after she finished work, I had a bit of time to spare, and I was tempted to go check out some of the cool afternoon tea venues. However, I’d have to go by myself.

To help write this blog post, I asked some of my Twitter friends if it was okay to go to afternoon tea by yourself, or if it was a little weird.

I’ve got no issues with going out for food or drinks on my own, I’ll happily go to a restaurant and ask for a table for one (I did when I went to Middlesbrough last week) or sit in the pub with a pint and my Kindle. However, I’ve never done afternoon tea by myself, and when I asked around, not many other people had either.

No - afternoon tea is meant to be shared with friends!

English Cream tea said “IMHO: no! It’s fine to tuck into treats home alone (a luxurious pause) but it misses the sharing/rapport bit!”

I think this is the main issue about going to afternoon tea on your own. Afternoon tea is a great excuse to go out with family and friends and have a chat over tea and cake. If you’re going out on your own, you miss that socialising aspect.

A lot of afternoon teas I've seen are meant for at least two people, and are specifically priced for more than one person (especially if you go on a website like Groupon). Asking for a tea for one is going to get you at best, some funny looks or at worst, you'll have to eat two peoples' worth of scones and sandwiches. Which isn't always necessarily a bad thing!

Yes - it's okay to go to afternoon tea by yourself!

On the other hand, #CreamTeaHour said “Yes indeed! You can really enjoy the moment if you go solo!”

The main advantage of afternoon tea on your own is the flexibility. You can go wherever you want at anytime you want, and order what you want. You may meet some like-minded people enjoying afternoon tea on their own too!

Kate C said: "People get v hung up on doing things on their own - (it's) actually v nice!"

If you're still worried about going to afternoon tea on your own, Jenny Prigg said: "(Just) look enigmatic... pretend you are famous... an author... movie star... secret celebrity."

In the end, I didn't go for afternoon tea on my own in London, but this doesn't mean I wouldn't in the future!

Have you been for afternoon tea on your own? If you own or work in a restaurant, have you seen many people order afternoon tea for one? Let us know in the comments or on social media!

<< From Tokyo to the Afternoon Tees

Sam | North East Family Fun
Yes! I travelled to London for work last year and had a few hours to kill around Kings Cross before my train. Decided to treat myself to afternoon tea for one in Fortnum & Mason and very much enjoyed it! I would do it again in a heartbeat. It is nicer with friends but sometimes of the time is right you've just got to treat yourself!
8/7/2017 10:26:51 PM
Kate | Afternoon Tees
Thanks Sam! A Fortnum and Mason afternoon tea sounds yummy. It's fantastic to hear that so many people are happy to go to afternoon tea on their own.
8/7/2017 10:51:08 PM
Antonia
Such a great post! I love afternoon tea but still am not sure I'm brace enough to go alone!
8/7/2017 11:34:32 PM
Kate | Afternoon Tees
Thanks Antonia - glad you enjoyed! A few people who have commented on this article say they would love to go out to Afternoon tea by themseves but aren't quite brave enough, and that's okay :) Afternoon tea is good whether you go with friends or by yourself!
8/8/2017 3:30:19 PM
Holly Joseph
As a mother of 4 young kids who gets almost no time to herself, I can say that going out for afternoon tea alone is the BIGGEST and most luxurious treat in the world, haha! Last time I did it was when I was in early labour with my youngest and it was the best thing ever. :)
8/8/2017 12:22:28 AM
Kate | Afternoon Tees
Holly Joseph - Wow! I am very impressed! :) I think any time is a good time for afternoon tea, even if you are in labour!
8/8/2017 3:33:16 PM
Claire
I do loads of stuff on my own, always have since being an Army wife and often alone for months, it's totally cool and now I'm a mum its actually preferred sometimes!!
8/9/2017 5:58:49 PM
Kate | Afternoon Tees
Thanks Claire - I'm loving that so many people are cool with the idea of doing afternoon tea alone and that so many more have already done it :)
8/10/2017 10:22:33 AM
Mia
I love getting tea with friends, but sometimes it's nice to have an hour or so of quiet for yourself and enjoy the little luxury!
8/11/2017 2:28:08 PM
Kate | Afternoon Tees
You're absolutely right Mia - it's lovely to have afternoon tea with friends, but it's also nice to have some time to yourself too.
8/11/2017 4:51:58 PM
SHAMEEZ PATEL
I haven't gone out for a formal afternoon tea by myself, but have had breakfast, lunch and have even gone to the cinema by myself. Informally, mid-shop, I have stopped to grab a cuppa and have a scone or a muffin alone, but never anywhere where afternoon tea was formally being served, if that makes sense? Anyway, I think if you need some time to yourself and tea seems like a good idea, go for it!
8/11/2017 4:23:05 PM
Kate | Afternoon Tees
Shameez - this is exactly me! I've gone for coffee and food by myself, but never an 'official' afternoon tea.
8/11/2017 4:54:34 PM
Sara
You gotta treat yourself. And sometimes that involves treating yourself to deliciousness and alone time! :)
8/11/2017 4:28:18 PM
Kate | Afternoon Tees
Sara - Hehe, when I read your comment I thought of 'Treating Yo'self' from Parks and Rec! :) You're quite right!
8/11/2017 4:56:26 PM
Kellyn
Nothing wrong at all. I did it in Sweden.
8/24/2017 2:51:18 PM
Jean | DelightfulRepast.com
Kate, solo afternoon tea can be a wonderful thing. I used to attend, and sometimes put on, 2- or 3-day conferences. Too much "people time" for this introvert! So I'd plan ahead which afternoon I could slip away for solo time. When the conference city had afternoon tea venues, my solo time was pure heaven!
2/10/2018 9:00:01 PM
NYC NY Local moving
Thanks really good weblog!
9/24/2021 7:02:18 PM