It wouldn't be Christmas without a big slice of cake, and here at Afternoon Tees we love to make our own. Find out how we went from cooking, feeding and icing (and eating!) our homemade cake.

For the last six years or so, we've made our own Christmas cakes - a large one for us and a few smaller ones for parents and siblings. One year we ended up making about thirteen Christmas cakes in total, with the grand plan of giving them out to family as Christmas presents. Cooking them all wasn't a big problem, it was icing them all that was a pain!

We normally start making our Christmas cake at the end of September, but as we were out a lot, we ended up making it a bit later in October instead. We use the Eric Lanlard recipe as it provides a lovely moist cake and also contains chocolate, which provides a hint of sweetness. 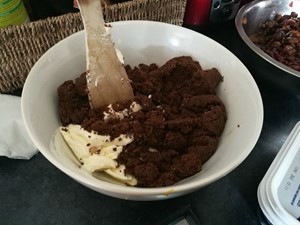 The one thing we can recommend is to use high-quality ingredients in your cake as you can really taste the difference. One year we were on a budget and had to use cheaper ingredients and the cake didn't taste as nice.

We do make tweaks to the recipe in order to mix it up. We found soaking the sultanas and raisins in orange juice instead of brandy gives the cake a nice citrusy kick, and another year we added dried cranberries and chunks of ginger instead of cherries. 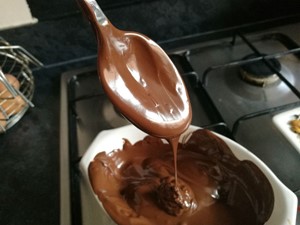 We do cheat and melt the chocolate in the microwave rather than a bain-marie though!

Once the cake has cooked and cooled, it gets wrapped up in brown paper and tin foil and fed with brandy once a week in order to keep it moist 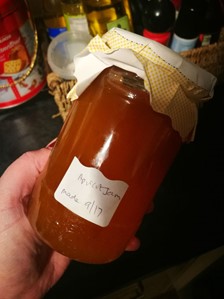 The cake gets decorated in early December. First, the marzipan goes on. Now we know not everyone likes marzipan but we love it. If you're not a fan, I read somewhere that you can put two layers of icing on instead (otherwise the oils from the cake leak through the icing).

We had a special treat this year as we got some homemade jam instead of shopbought. It was warmed in a pan, smeared on the cake and then we added a thick layer of marzipan. The marzipan was left to dry for a day and then it was time to decorate. 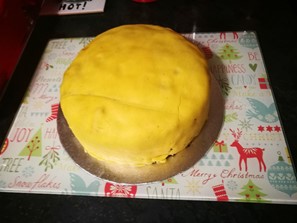 Now last year we used royal icing in a tub as a shortcut - this didn't work as well as we thought it would as it was a bit sloppy and didn't form the beautiful soft peaks that royal icing normally provides. So this year we went back to fondant icing.

We rolled out the icing and put it on the cake and then added some stars using blue fondant icing. Some edible silver balls provided a shiny finishing touch. Simple but elegant. 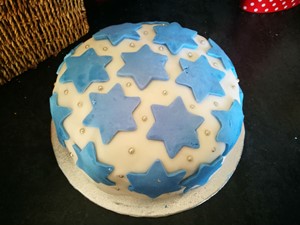 And there we go! A lovely iced Christmas cake! We normally start eating ours on Boxing Day, but I know some people leave theirs until New Year.

Have you made your own Christmas cake this year?