I planned to celebrate Afternoon Tea week by going out for a luxurious afternoon tea, but circumstances beyond my control meant that I had to cancel.

I still wanted to do something nice for Afternoon Tea week so I decided to throw myself a challenge – to throw my very own afternoon tea!

Although I’ve been out for afternoon tea many times, I’ve never thrown one myself so I was looking forward to the challenge!

With all this in mind, I sat down and put together a provisional menu:

After putting together the menu it was a case of popping over to the shops and buying all the food! I wanted to make as much as possible on the day so it was fresh, but I decided to make the brownies and cupcakes the day before, just to save time (and keep me sane!)

The brownie recipe is one from the Hummingbird Bakery and I’ve been using it for years, so much so that the page is the cookbook is absolutely filthy! Once the cupcakes and brownies were ready, I left them to cool and stored them in an airtight container, ready for the next day.

I made the cheese and onion tarts in advance – I made a large pie a while ago and made some tarts with the leftover pastry, so they just needed heating in the oven on the day.

The sausage rolls were a bit of a cheat – they were premade so all I needed to do was cook them on the day!

The sandwiches, scones and chocolate tarts were made on the day, and I decorated the cupcakes on the day by making some buttercream. A third of the buttercream was flavoured with vanilla essence, a third with chocolate and the final third with blue dye. 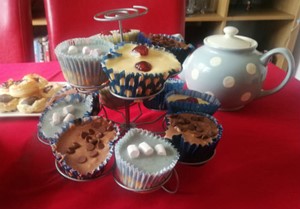 Onto the fun part, decorating! I got a tiered cake stand for Christmas and this was the perfect time to use it. I plated up the food, put an afternoon tea-themed message on the lightbox and it all looked pretty good, if I do say so myself.

A few things didn’t go as planned. The chocolate tarts weren’t very nice and the buttercream icing was a bit melty, when the cupcakes were out at room temperature they started to drip a little bit. The cheese and onion tarts went down a treat though, as did the pesto sandwiches and the brownies.

There was lots of food to go round, so much so that there were sandwiches and cakes leftover for tea too!

I really enjoyed making afternoon tea and had a really good time, and would definitely do it again!

>> Afternoon tea at the Majestic Theatre

Travel with Alaine
Looks scrumptious! I have always wanted to throw an afternoon tea/coffee (Swedish Fika) I recently hosted a Vegetarian dinner feast and it was so much work but so much fun to cook and decorate!
8/15/2017 8:21:41 PM
Afternoon Tees | Kate
Thanks Alaine! Planning and prepping a meal is always a lot of hard work, but it's always worth it. I've never heard of a Fika before but it sounds really interesting! A long leisurely coffee break with lots of nibbles? Sign me up! :)
8/15/2017 10:02:18 PM
Marissa
I love this! I've always wanted to plan one but never knew how to start. Thank you!
8/16/2017 3:44:48 PM
Afternoon Tees | Kate
Thanks Marissa! It's not as bad as you think; best place to start is to plan what food you're going to serve and everything will fall into place from there.
8/17/2017 8:48:38 PM