We all love a good afternoon tea, and one of the greatest things about afternoon tea is a lovely warm scone laden with tangy jam and melt-in-the-mouth clotted cream.

However, there lies a dilemma... do you put the jam on the scone first, or the cream first?

I did a bit of research with my social media followers and asked them which they preferred. I tallied up the results and they were as follows: 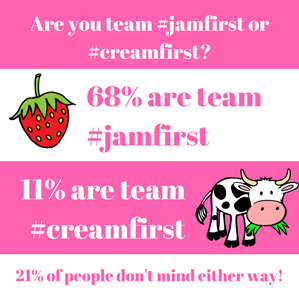 The results were insightful, to say the least!

So, why do people put jam or cream on their scone first? 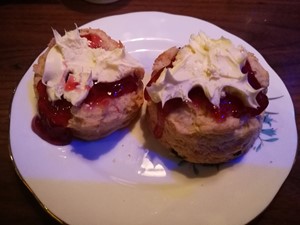 Otherwise know as 'Cornish' style, this involves smoothing a layer of jam on your scone first, and then spooning the cream on top.

This style was the most popular by a wide margin. When I asked people why they put jam on their scone first, they came back with the following answers:

Aesthetics: A lot of people agreed that putting jam on first looked a lot nicer. By spooning on a layer of jam first, you can then top it with a peaked dollop of clotted cream, which looks really pretty when you take a photo for social media.

If you do it the other way round, the jam and cream can tend to mix, resulting in a slightly unattractive pinkish smush.

It's the done thing: Etiquette experts Debretts say that jam should always go before cream. 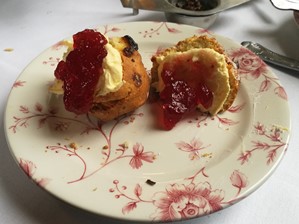 Otherwise known as 'Devon' style, this involves slathering on a layer of clotted cream, and then plopping the jam on top.

Cream first wasn't as popular as jam first, but the people who voted for it were very steadfast in their support for #creamfirst - "anything and anyone else is just plain wrong" one person was heard to say! The logic behind this was:

Structural integrity: By layering a thick layer of clotted cream on first, not only can you get more jam on the top of your scone, but it is more structurally sound, meaning that your toppings won't slide off as you try and eat them.

Note that this only works if the cream is clotted, whipped cream isn't as sturdy!

It just makes sense! If clotted cream is a substitute for butter, then it belongs on the bottom. If you were making a sandwich, you wouldn't put your filling on before the spread!

Interestingly, when I looked at the data, men were more likely to put cream on their scone first. If any men who read the blog would like to elaborate on why this is the case, please do!

Interestingly, just over a fifth of people I asked said they don't mind, and that the order the jam and cream are in has no impact on their enjoyment of their scone.

I must admit, I've tried scones with both jam and cream first during my reviews and I honestly can't notice much of a difference (I daresay some blog viewers will strongly disagree with this!). As long as a jam has both jam and clotted cream on it, that's all that matters to me! 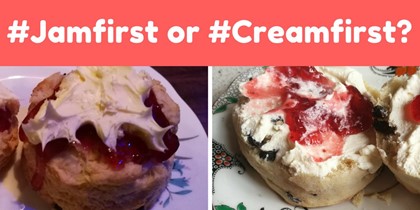 Do you prefer jam or cream first on your scone, or do you not have a preference? Let me know in the comments!

<< Afternoon tea at the Majestic Theatre